”The starting point for Moiré was the orchestral work Usvapatsas (Sculpted mist), which I wrote for the Finnish Rso in 2017. In Usvapatsas the french horns parts were written in just intonation and played as if the horns were natural horns with no valve mechanism. Tommi Hyytinen, the future commissioner of Moiré, was performing the piece in the horn section of rso, and soon after the premiere he approached me with a suggestion to write a concerto for him – a natural horn concerto.

Moiré continues my exploration to combine microtonal elements with predominantly equally tempered instruments. In Moiré the natural horns in just intonation and the slightly tempered Baroque orchestra are put against each other, confronted and merged. In the piece the two temperament systems co-exist together and provide harmonic and melodic possibilities that neither of the temperament systems would do alone.

The 20-minute concerto is in three separate movements with distinct characters. The first movement opens with solo horn introduction, leading to richly orchestrated tutti that introduces the key themes of the concerto: two different temperament systems, the extended harmonic possibilities made possible by the just temperament's microtonal deviations from equal temperament and the dense micro interval interference of frequencies that are very close to each other. These interferences are usually created by the natural horns with different fundaments, such as horn in G vs. horn in Eb, where a lot of very sharp dissonant opportunities arise as the number of exact unisonos may be very limited (in fact, with G and Eb horn scales there are zero unisonos within the first 20 partials of the G and Eb overtone scales!). In the concerto the interferences are harmonically treated as dissonances, which can – and will – be resolved to a consonant in a pretty much same manner than what is stated in the classical theory of functional harmony, where dissonances are resolved to consonant by (contrary) motion of voice(s). The sharp dissonant interferences that are an essential part of the concerto have also given concerto its title Moiré,  – a term borrowed from visual sciences with obvious and immediate parallels in music.

The second movement is a characteristic 'fast movement', where the solo horn (in G) and the orchestral horn (in C) get a chance to play rapid and flashy ascending and descending scales in parallel intervals (fifths). The peaceful co-existence of just and equal temperaments is the dominant feature of the second movement, as well as the presence of several sharp textural cuts – something that I rarely do, and which do not happen elsewhere in the concerto. The final movement is focused on interference, sound color and harmony. The solo horn interludes and solo cadenza bring melodic content to the movement, which is static and transparent in its nature.

Composing Moiré was made possible by two major patrons. The Finnish Cultural Foundation's generous support created an economic frame that enabled both commissioning and composing the concerto, while the Tukkinen family provided the most inspiring residential facilities imaginable for composing. I take this opportunity to hereby address my deepest gratitude to them both.” (O.V., 28 January 2021) 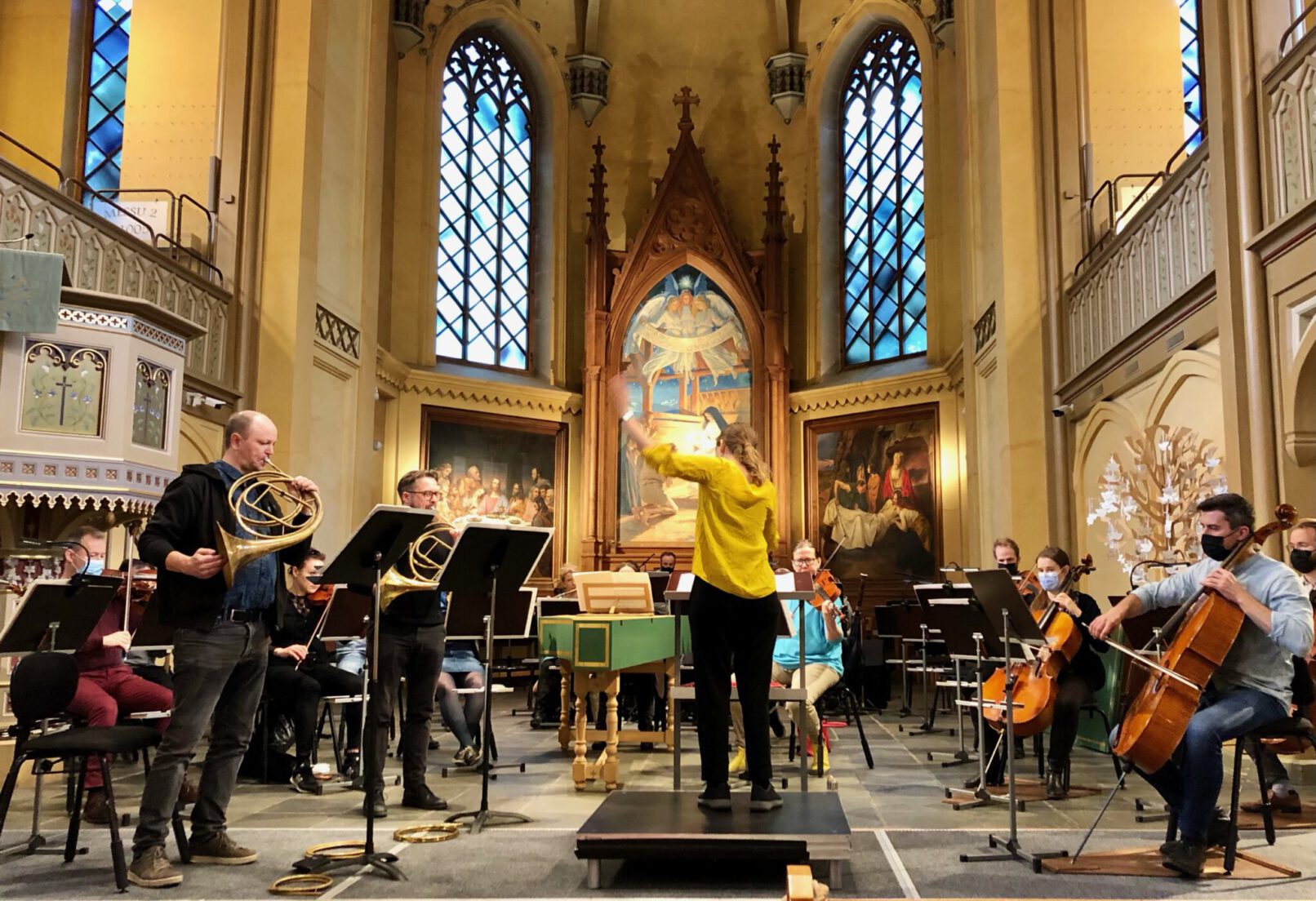 Aliisa Neige Barrière rehearsing Moiré at the general rehearsal of the premiere of the version for modern orchestra, 24 September 2021, Vaasa Church. (Photo O.V.)
Back to Works